Cat spraying is possibly one of the biggest problems cat owners face, and the statistics are staggering.

In this article, I will answer some of your biggest questions about cat spraying, as well as how to stop your cat spraying and much more.

When do male cats start spraying?

There is no specific age for when your cat might start spraying and this spraying behaviour from male cats is the reason that most people get their beloved pet neutered.

Most Male cats will start spraying around the age of 6 months with a few starting as early as 4-5 months old.

The easiest way to know when your cat will start to spray is by watching it. A male cat due to start spraying will often start calling or yowling for a mate while rubbing itself against things.

The answer is yes. But according to Dr. Cindi Cox of the Massachusetts Society for the Prevention of Cruelty to Animals’ Angell Animal Medical Center in Boston it is not about dominance or territory. Cats might spray because of underlying medical conditions, litter box issues, or anxiety, the latter being most common cause.

Of course, the first thing we want to do when we are addressing a spraying problem is to make sure the cat isn’t spraying because of a medical condition. The most common medical reason a cat would suddenly start peeing in odd places would be a urinary tract infection.

When do cats start spraying?

If your cat is going to start spraying due to territory issues it will happen around the age of 6 months, if they start spraying later in life look at medical or social conditions as well as stress.

Do all male cats spray in the house?

Most. Neautered male cats are unliekly to spray in the house if they were neutered before reaching secual maturity. If they were neautered later in life then it is possible that the spraying is habit rather than an attractive purfume to sttract the ladies.

Why do cats spray?

If stray cats have been in your yard and your cat goes outside they may start spraying the territory to mark it as theirs for protection.

They could however be spraying to attract a mate, yes that is right that awful smell to you is a powerful attractant to other cats.

What is cat Spray?

Quite simply cat spray is urine being forcefully ejected from the cats body onto a vertical surface. If they are urinating on a horizontal surface such as your carpets or bed, you have a different problem.

Do male cats spray after being neutered?

The short answer sometimes. Spraying is a behavior most commonly seen in entire male cats. However desexing or neutering your cat may reduce the frequency of spraying it may not always solve the problem.

It smells pungent! The reasons cats can learn so much from other cats urine is because it contains so many extra communication chemicals.

These smell awful to humans, and like almost nothing else on earth.

How to stop cats from spraying my car?

Why do cats spray on their owners? 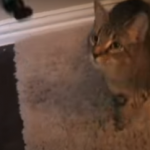