The ‘tabby’ is used to describe a cat with stripes or irregular patterns and comes from the Spanish word tabi – a kind of cloth with irregular tie-die-like markings.

How Cat Colors are made…

The color-conformation genes determine the color, pattern, and expression of the coat. Since these characteristics are among the most important of the cat’s features, at least from a breeding point of view, more emphasis is given the color conformation genes than the others.

The first of the genes controlling coat color is the color gene. This gene controls the actual color of the coat and comes in three alleles: black, dark brown, or light brown. This three-level dominance is not at all uncommon: the albinism gene, for example, has five levels.

The black allele, B, is wild, is dominant, and produces a black or black-and-brown tabby coat, depending upon the presence of the agouti gene. Technically, the black is an almost-black, super-dark brown that is virtually black; true black is theoretically impossible, but often reached in the practical sense (so much for theory).

The dark-brown allele, b, is mutant, is recessive to black but dominant to light brown, and reduces black to dark brown.

The light-brown allele, bl, is mutant, is recessive to both black and dark brown, and reduces black to a medium brown.

The second of the genes controlling the coat color is the color-density gene. This gene controls the uniformity of distribution of pigment throughout the hair and comes in two alleles: dense, D, and dilute, d.

The dense allele, D, is wild, is dominant, and causes pigment to be distributed evenly throughout each hair, making the color deep and pure. A dense coat will be black, dark brown, medium brown, or orange.

The dilute allele, d, is mutant, is recessive, and causes pigment to be agglutinated into microscopic clumps surrounded by translucent unpigmented areas, allowing white light to shine through and diluting the color. A dilute coat will be blue (gray), tan, beige, or cream.

The second of the genes controlling coat color is the orange-making gene. This gene controls the conversion of the coat color into orange and the masking of the agouti gene and comes in two alleles: non-orange and orange.

This gene is sex-linked; it is carried on the X chromosome beyond the limit of the Ychromosome. Therefore, in males there is no homologous pairing, and the single orange-making gene stands alone. As a result there is no dominance effect in males: they are either orange or non-orange. If a male possesses the non-orange allele, o, all colors (black, dark brown, or light brown) will be expressed. If he possesses the orange allele, O, all colors will be converted to orange.

In females there is a homologous pairing, one gene being carried on each of the two Xchromosomes. These two genes act together in a very special manner (as a sort of tri-state gene), and again there is no dominance effect.

Shortly after conception, when a female zygote is only some dozens of cells in size, a chemical trigger is activated to start the process of generating a female kitten. This same trigger also causes the zygote to ‘rationalize’ all the sex-linked characteristics, including the orange-making genes. In this particular case, suppression of one of the orange-making genes in each cell takes place in a not-quite-random pattern (there is some polygene influence here). Each cell will then carry only one effective orange-making gene.

A female kitten has two X chromosomes, and therefore two orange-making genes, one from each parent. Assuming for the sake of discussion an equal likelihood of inheriting either allele from each parent—an assumption that is patently false, but used here for demonstration only—then one quarter of all females would be non-orange, one-quarter would be orange, and one-half would be tortoiseshell. A male kitten, on the other hand, has only one X chromosome, and therefore only one orange-making gene. Keeping the same false assumption of equal likelihood, then one-half of all males would be non-orange and one-half would be orange. This means that there would be twice as many orange males as females if our assumption were correct.

Since a male has only one orange-making gene, there cannot be a male tortie. An exception to this rule is the hermaphrodite, which has an XXY genetic structure. Such a cat can be tortie, since it has two X chromosomes, but is almost invariably sterile. In fact, despite the presence of male genitalia, a hermaphrodite is also an underdeveloped female, and may have both ovaries and testes, with neither fully functional.

The brown and dilute colors are rarer (hence generally more prized) because they are recessive. A table of all possible combinations of the three genes controlling color will show all eight basic coat colors, among which are six female or twelve male black cats but only one female or two male fawn.

Note that although tortoiseshell females are two-color they introduce no new colors.

It may also be noted that red and cream dominate any of the true (black or brown) colors: a red coat is red regardless of whether the color gene is black, dark brown, or light brown. The color gene is masked by the orange-making gene. This, coupled with the fact that males are either red or non-red require that the color chart show oO and Oo as distinctly separate. A male has only the first of the two genes: o from oO or O from Oo. In some texts, the orange-making genes are indicated as o(O) and O(o) to emphasize the sexual distinction.

The full color allele, C is wild, is dominant, and produces a full expression of the coat colors. This is sometimes called the non-albino allele.

The Burmese allele, cb, is mutant, is recessive to the full color allele, codominant with the Siamese allele, and dominant to the blue-eyed albino and albino alleles, and produces a slight albinism, reducing black to a very dark brown, called sable in the Burmese breed, and producing green or green-gold eyes.

The Siamese allele, cs, is mutant, is recessive to the full color allele, codominant with the Burmese allele, and dominant to the blue-eyed albino and albino alleles, and produces an intermediate albinism, reducing the basic coat color from black/brown to a light beige with dark brown ‘points’ in the classic Siamese pattern and producing bright blue eyes.

The Burmese and Siamese alleles are codominant, that is they each have exactly as much dominance or recessivity. It is possible to have one of each allele, cbcs, producing a Siamese-patterned coat with a darker base body color and turquoise (aquamarine) eyes: the Tonkinese pattern.

The blue-eyed albino allele, ca, is mutant, is recessive to the full color, Burmese and Siamese alleles and dominant to the albino allele, and produces a nearly complete albinism with a translucent white coat and very washed-out pale blue eyes.

The albino allele, c, is mutant, is recessive to all others, and produces a complete albinism with a translucent white coat and pink eyes.

The albinism genes combine in some rather interesting ways:

Notice how the dominance characteristics among the alleles are normal except for the combination of Burmese and Siamese, which produce the Tonkinese pattern.

The next gene controlling the pattern of the coat is the agouti gene. This gene will control ticking and comes in two alleles: agouti, A, and non-agouti, a.

The agouti allele, A, is wild, is dominant, and produces a banded or ticked (agouti) hair, which in turn will produce a tabby coat pattern.

The last of the genes affecting the coat pattern is the tabby gene. This gene will control the actual coat pattern (striped, spotted, solid, etc.) and comes in three alleles: mackerel or striped tabby, T, Abyssinian or all-agouti-tabby, Ta, and blotched or classic tabby, tb.

The mackerel-tabby allele, T, is wild, is co-dominant with the spotted tabby and Abyssinian alleles and dominant to the classic-tabby allele, and produces a striped cat, with vertical non-agouti stripes on an agouti background. This is the most common of all patterns and is typical grassland camouflage, where shadows are long and strait.

A spotted tabby is genetically a striped tabby with the stripes broken up by polygene influence. There is no specific ‘spotted-tabby’ gene. This spotted coat is a typical forest camouflage, where shadows are dappled by sunlight shining through the trees. Do not confuse the spots of our domestic cats with the rosettes of the true spotted cats: entirely different genes are involved. 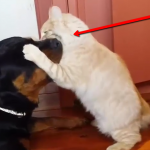 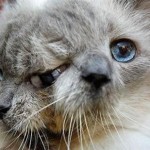